Images from the Women’s Ao Dai Festival in Bac Giang Province in 2022. (Photo: The Duong)

Designer Do Trinh Hoai Nam is a special guest at the Ao Dai Festival for Women in Bac Giang Province in 2022. The designer made a lasting impression at this year’s festival with two collections called ‘Heritage’ and ‘Dream’. .

On the occasion of the 47th anniversary of the liberation of the South and the reunification of the country (April 30), the successful celebration of the 13th National Congress of Women’s Deputies and the event that Bac Giang hosted the badminton competition. At the 31st SEA Games at the Provincial Gymnasium, the Department of Women’s Advancement in Bac Giang Province in cooperation with the Provincial Women’s Union and the Provincial Labor Association held the 2022 Bac Giang Women’s Ao Dai Festival and awarded the ceremony. Graceful ao dai competition for women union members and workers in 2022. Designer Do Trinh Hoai Nam is the name grabbing attention at the Women’s Ao Dai Festival in Bac Giang Province 2022 with 2 iconic collections with own imprint. Both collections bring the cultural and artistic values ​​of the artists who carve into the national jersey. 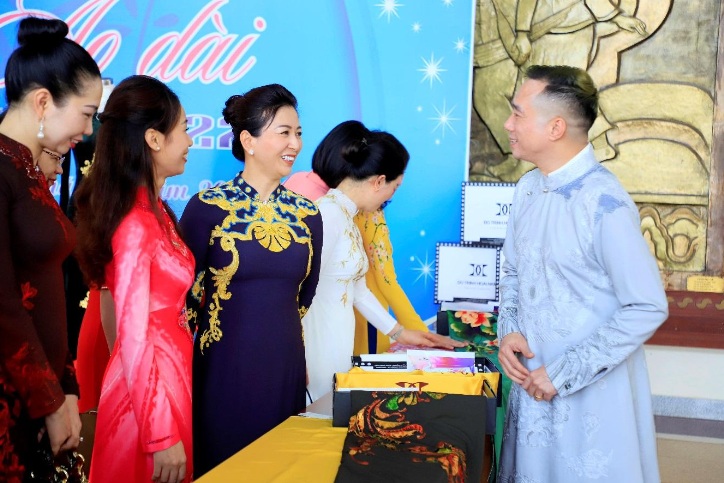 Ms. Le Thi Thu Hong – Permanent Deputy Secretary of the Provincial Party Committee, Chairperson of the People’s Council of Bac Giang Province heard the exchange about the Ao Dai by the designer Do Trinh Hoai Nam. (Photo: The Duong)

The Heritage Collection, selected by the designer as a signature collection, will be performed at the Women’s Ao Dai Festival in Bac Giang Province. Ao Dai’s collection of 15 models is inspired by the cultural heritage of Vietnam, recognized by UNESCO as a World Heritage Site. The collection is the result of the efforts and creativity of more than 100 embroidery and sewing artisans from traditional handicraft villages in Thuong Tin, My Duc, and Hang Bac, Hanoi. With the Heritage Region collection, designer Do Trinh Hoai Nam aims to present the most important masterpieces of traditional Vietnamese culture and introduce them to a large number of local and international friends.

The Dream Collection is the second collection that the designer has chosen to present for the occasion. Because 20 models of Ao Dai depicted by the designer represent a dream of beauty extracted from the precious quintessence of Bat Trang ceramics to paint a mysterious but colorful picture of Mother Earth. The Dream Collection is a combination of world fashion trends using shades of yellow, blue and orange to create fresh and vibrant images of spring-summer outfits. 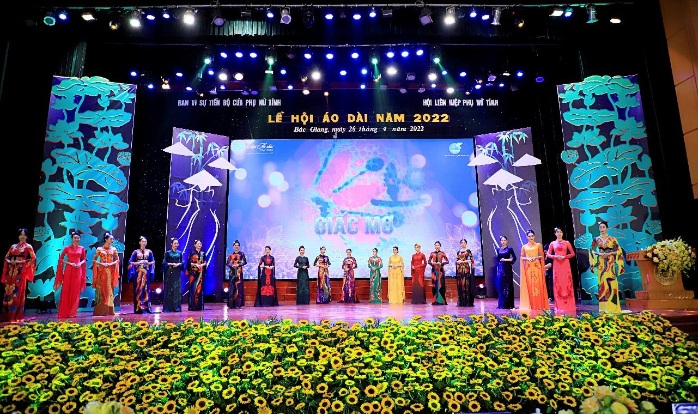 Collections at the 2022 Ao Dai Festival for Women in Bac Giang Province. (Photo: The Duong)

Inspired by wooden sticks of Buddhist scriptures preserved in Vinh Nghiem Pagoda, Yen Dung, Bac Giang, Moc Ban Ao Dai’s collection has been listed by UNESCO as a documentary heritage of the World Memory Program in Asia – In the Pacific Ocean, the Moc Ban collection – recognized is an impressive highlight to introduce the traditional cultural beauty of Bac Giang’s homeland through the designs of Ao Dai.

Besides, also in this festival, the Ao Dai designer Do Trinh Hoai Nam dedicated to the Ao Dai by introducing and exhibiting typical Ao Dai models and fabrics in the hall of the hall for the delegates to be admired; Introduce skillful and refined hand embroidery techniques by artisans.

The 2022 Bac Giang Provincial Women’s Ao Dai Festival, with the spirit and values ​​of traditional culture, has attracted the attention of a large number of ao dai lovers. The festival will be a rendezvous that connects and nurtures the love of Ao Dai with the hearts of the people of Bac Giang in particular and across borders. 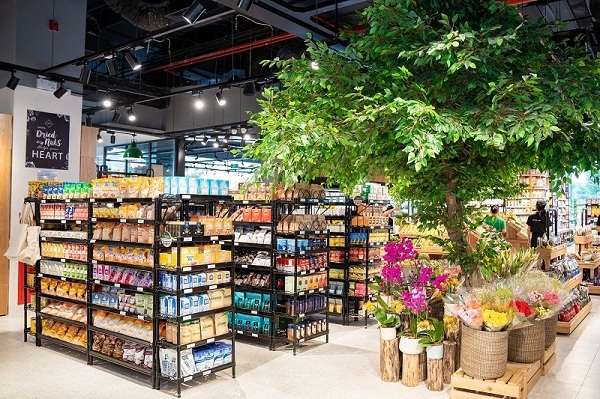 “Breaking” into the best new generation Vincom in Hanoi: what to play, where to live virtually?

Elevator crashes, two people are paralyzed in both legs

Thousands of tourists enjoy the holidays at the Ho Chi Minh City Zoo and Botanical Gardens, waiting in line for 30 minutes to buy tickets 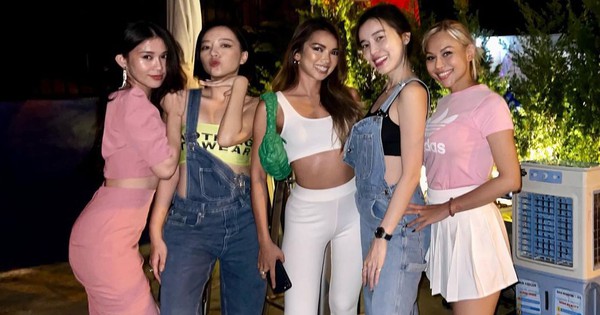